M3 Metals Corp. (TSX-V: MT; FSE: XOVN.F) (“M3 Metals” or the “Company”) is pleased to announce that it has secured an option (the “Option”) from two separate vendors (the “Vendors”) to acquire a 100% right, title and interest in the Mohave Mine Gold Project (the “Project”) comprised of a total of 160 claims including lode claims and mill-site claims. The Project area covers numerous historic gold mines in the Weaver mining district, Mohave County, Arizona, USA. In addition to the historic gold mines on the Project, there is an approximate 5-kilometre gold-in-soil and gold-in-rock geochemical anomaly that extends across the entire length of the Project (see Figure 1). Large areas of the anomalous gold geochemistry including several historic gold mines have not had any modern exploration or drilling. The Company has secured the mineral rights to all the historic mines falling within the Project and believes they may be related to a property wide gold system.

There have been more than 550 historic drill holes totaling approximately 68,000 feet drilled on the project primarily focusing on the development of historic non-compliant resources within limited areas on the Project (see Figure 1 for areal extent of historic drilling). All the historic drilling has been done in the northern one-fourth of the property, and most of these holes were shallow, 100 foot-deep, air-track holes, many of which stopped in mineralization.  Most of the work was done by private companies in the 1980’s and 1990’s who spent approximately 12 million developing the historic resources in the northern part of the Project rather than exploring the potential for a much larger deposit.

Previous development work includes blasting of an initial bench at the Klondyke Mine (see Figure 2) representing the beginning of open-pit style operations. The blasted material remains stockpiled next to the primary jaw crusher located at the 350 tonne-per-hour crushing facility that remains on the Project’s mill-site claims where heap-leach infrastructure including a heap-leach pad, buildings, a jaw crusher, two cone crushers and a conveyor system were installed and remain in good condition (see Figure 3).

Significant potential for identifying and defining new mineralized areas remains as is evident from widespread elevated gold-in-soil and mineralized rock outcrops occurring across the Project. Potential targets include expanding on historic drilled areas on the northern half of the Project and the large elevated geochemical untested/undrilled areas and historic small-scale underground mines that occur on the southern half.

Currently the Company is engaged in an aggressive data compilation and data discovery exercise and plans to update the market as appropriate.

Adrian Smith, President of M3 Metals comments “We are extremely pleased with the acquisition of this advanced-stage project that still has significant upside.  Historically the private owners were focused on development and did not test the numerous remaining targets on the Project for its larger potential. We are eager to begin an aggressive drilling campaign on the extensive target areas on the southern portion of the property while expanding on those to the north.” 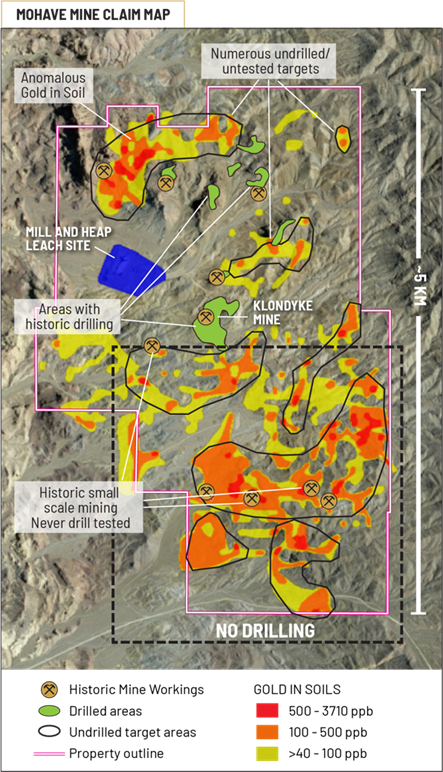 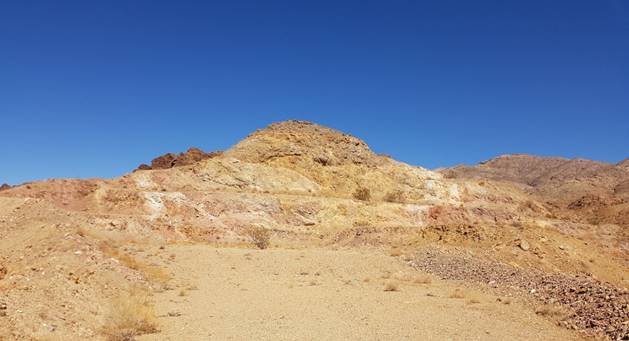 Figure 2. Initial Bench Development at the Klondyke Mine 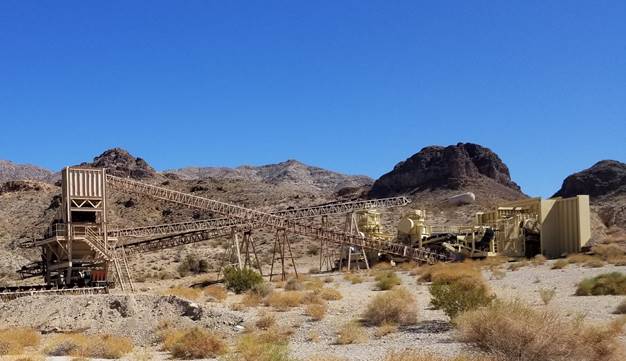 Additional information is available on the Mohave Gold Project page at www.m3metalscorp.com.

The Company can exercise the Option to acquire a 100% right, title and interest in and to the Mohave Project by making the following cash payments, claim fee cost reimbursements and exploration expenditures (with all dollar figures being in USD$):

(ii)     Claim Fee Reimbursement: Within ten (10) days of both execution of the Agreement and receipt by MLN, from the Vendors, of proof of payment by them to the    BLM of the claim maintenance fees for the Claims for the period September 1, 2019 to     August 31, 2020 (the "Fees"), pay to       the Vendors the amount of the Fees as  reimbursement of their costs in maintaining the Claims during negotiation of the Agreement;

Where "Payment Commencement Date" means the earlier of: (i) the receipt of US Bureau of Land Management approval of certain exploration and development permit applications on the Mohave Project; and (ii) eighteen (18) months after the effective date of the Agreement provided that the Payment Commencement Date cannot be less than twelve (12) months from the effective date of the Agreement.

To exercise the Option, the Company must, in addition to making the payments above, make the following exploration expenditures:


(ii)   $200,000 in additional expenditures (for total aggregate expenditures of $250,000) after the Payment Commencement Date but on or before the date of the Third Payment;

Upon the payment of the $3,000,000 Final Payment, the Agreement provides that the Company will grant a 1.5% net smelter royalty (the "Royalty") to the Vendors.

Further details of the Agreement are available in a material change report which, together with this news release, is filed on SEDAR under the Company's issuer profile.

The Agreement may be subject to its acceptance for filing by the TSX Venture Exchange.

The Company reports that Andrew Bowering has resigned as a director of the Company. The Company would like to thank Mr. Bowering for his contributions to the Company and wish him the best with his future endeavours.

M3 Metals Corp. is a Canadian listed Company, focused on creating shareholder value through discoveries and strategic development of mineral properties in North America. For additional information please visit the Company’s website at www.m3metalscorp.com. You may also email This email address is being protected from spambots. You need JavaScript enabled to view it. or call investor relations at (604) 669-2279.

This news release may contain certain “Forward-Looking Statements” within the meaning of the United States Private Securities Litigation Reform Act of 1995 and applicable Canadian securities laws.  When or if used in this news release, the words “anticipate”, “believe”, “estimate”, “expect”, “target, “plan”, “forecast”, “may”, “schedule” and similar words or expressions identify forward-looking statements or information.  These forward-looking statements or information may relate to future prices of commodities, accuracy of mineral or resource exploration activity, reserves or resources, regulatory or government requirements or approvals, the reliability of third party information, continued access to mineral properties or infrastructure, currency risks including the exchange rate of US$ for CDN$,  changes in exploration costs and government royalties or taxes in Canada, the United States or other jurisdictions and other factors or information. Such statements represent the Company’s current views with respect to future events and are necessarily based upon a number of assumptions and estimates that, while considered reasonable by the Company, are inherently subject to significant business, economic, competitive, political and social risks, contingencies and uncertainties. Many factors, both known and unknown, could cause results, performance or achievements to be materially different from the results, performance or achievements that are or may be expressed or implied by such forward-looking statements. The Company does not intend, and does not assume any obligation, to update these forward-looking statements or information to reflect changes in assumptions or changes in circumstances or any other events affections such statements and information other than as required by applicable laws, rules and regulations.